The fair city of Oslo in February seems to be the perfect setting for a music seminar and festival for many reasons. Norwegians seem to have an intrinsic love of music built into their very DNA, the venues are of a standard that puts most London music establishments to shame, but primarily because the biting temperature outside forbids any prolonged degree of sightseeing. Luckily By:Larm is held indoors across a range of intimate fan friendly venues which offer both top end acoustics, up close and personal surroundings and welcome relief from the face shredding wind outside.

During the day seminars and talks provide a relaxed setting for musical debate my personal favourite being Peter Hook entertaining a packed auditorium with an insight into the management style (or lack of) pertaining to the hedonistic Hacienda days. He also read from his recent 'How Not To Run A Club’ book and touched on his new venture, yes, opening a new club in his beloved Manchester. He should not be too perturbed this time around as should things not work out a career as an after dinner speaker and raconteur awaits. Later, By:Larm guide in hand it’s time to join the festival goers scuttling across the city centre from venue to venue through the blinding snow blizzard conditions.

From the first act it was clear that a veritable feast of musical delicacies to suit every palette would be on the menu. Ungdomskulen (Youth School) are an exuberant three-piece from Bergen who jovially blasted the Sub Scene audience with their brand of jazz infused prog-rock. 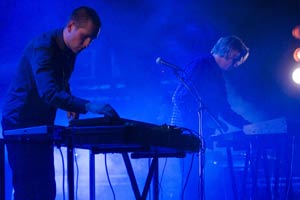 Sentrum Scene was the stage for synth heavy dance band Pow Pow (pictured left) to entertain a packed auditorium with instrumental electronica which gave more than a passing nod to electronic 80’s acts whilst simultaneously blending in a credible Delphic 2010 vibe. The Oslo quintet did a good job of gently massaging my brain’s frontal lobes whilst watching pleasing laser projections, certainly recommended.

The Navigators packed them in at Rockerfeller which at 1,350 capacity was one of the largest venues on the By:Larm circuit. Fronted by one of Norway’s leading vocalists a polished performance of folk, pop and rock tunes met with a welcome reception. At times reminiscent of Deacon Blue playing The Coral, their debut album hits the shops this week.

With Norway’s oil rich heritage the government can afford to subsidise the countries emerging new talent with grants available for bands to promote their music abroad and market themselves to a wider audience. To this end it’s seen that being in a band is a viable career option and therefore nurtured and respected as evident here.

Singer songwriter Line Larsen (pictured top) also chose this route and delivered a worthy performance of mid-tempo ballads at Sentrum Scene brought to life by an exceptional backing band. Similarly Shot At Dawn certainly woke up the small but perfectly formed crowd at Garage with their black metal screamathon. And at Mono Denmark’s female trio Giana Factory hit the gathered few with their dark stark folktronica. 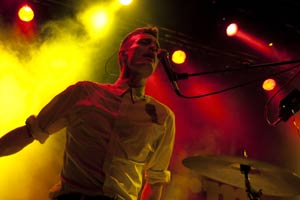 Recent Nordic standard bearers Casiokids were up to their normal monkey business treating us to infectious indie dance which got the crowd moving. Singing in their native Nordic language they hooked me in seemingly more heartfelt than the majority of other artists who sing in English. Come the end of the set, the infectious party atmosphere spread further as three dancing monkeys entered stage left to throw some shapes bringing the gig to its natural apeish crescendo. 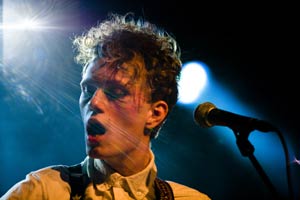 Well everybody has a band of the festival and for me Oh No Ono stole the accolade and ran from the Samfunnsalen stage into the night screaming 'we are the next big thing!’ and never looked back. Their multi layered, harmony fuelled, melodic arrangements would boost any film soundtrack. These 5 Danes were also dressed for the part with lead singer Malthe Fischer seemingly ready for a walk on part as Clint Eastwood in a 'Fist Full of Dollars’ paintball explosion remake. Short sharp pop treasures surfaced with ease embracing Beatles and Beach Boys magic that should have seen them sucking on helium balloons crossed with more contemporary MGMTs trippy cool. New album 'Eggs’ is a must.

The quality and professionalism of the bands throughout By:Larm was beyond doubt as was the organisation. Unlike similar events such as the Camden Crawl and the Great Escape access was granted at every venue with little or no queue. By:Larm takes all festival positives and adds its own chilled twist in a three day showcase that demands international recognition. It’s already in next years diary.