He’s broken chart records, ruled both the Official Singles and Albums Chart, plus created hits for a host of other stars – 2017 certainly seems to belong to Ed Sheeran at the halfway point, as the biggest singles and albums of the year to date are unveiled by OfficialCharts.com.

Ed’s third album ÷ is the runaway winner of 2017 so far, based on the Official Charts Company’s half-year snapshot of physical sales, downloads and streams of albums, while its lead singles Shape Of You and Castle On The Hill also dominate the singles leaderboard.

Boasting a combined total of 2 million copies across all formats, the main thrust of ÷’s success is physical sales: almost 1.22 million copies shifted, with a further 371,000 opting for downloads, and 415,000 streaming equivalent sales making up the rest.

Ed manages to secure a further two places in the Top 10 artist albums of the year so far – his sophomore release x comes in at Number 4, while his 2011 debut + is at 10.

Over on singles, Ed continues to break chart records at every turn with Shape Of You now overtaking Drake’s One Dance to become the UK’s most streamed song of all time. The song has been streamed a staggering 184 million times since its January release, it’s also the best selling song of the year too (717,000 downloads), a combined total of 2.6 million across all formats.

Castle On The Hill, is the second biggest song of the year to date, on 1.5 million equivalent units sold (455,000 downloads, 105m streams). Plus two more songs by Ed appear in the year-to-date Offiicial Singles Chart Top 40. Galway Girl places fourth with just over one million combined sales, while future single Perfect is 29th, on just under half a million equivalent units.

Ed Sheeran is delighted to announce his nationwide 2018 UK stadium tour, marking the biggest tour of his career to date!

BRIT Awards winner Rag’N’Bone Man rocks up with the second biggest album of the year so far with Human, the fastest-selling British male debut of the decade so far, and now a total of 668,000 equivalent units sold since release.

Drake’s More Life is making gains, rising five places over the last quarter to take third place on the chart, Drizzy’s tally stands at 224,000 across all formats. Little Mix’s first chart-topping collection Glory Days is holding on to its Top 5 slot too – 210,000 combined sales this year so far.

Take That’s Wonderland may have missed out on Number 1 upon release, but it’s already the sixth biggest album of the year so far (202,000 copies), while Stormzy’s debut Gang Signs and Prayer, the first pure grime Number 1 album, delivers 186,000 combined sales propelling it to seventh place at the midway point of the year.

Aside from the reissue of The Beatles’ classic Sgt Pepper’s Lonely Hearts Club Band (16), the biggest new album to be released in the second quarter is former One Direction star Harry Styles’ eponymous debut (17), with just under 109,000 combined units shifted so far.

Summer smash Despacito by Luis Fonsi and Daddy Yankee heads up the rest of the singles pack behind Ed. A remix of the track featuring Justin Bieber saw the Spanish hit take off in the UK back in May, kicking off its residency at Number 1, amassing 1.2 million combined sales.

However, it’s British acts that dominate the Top 10 of 2017 so far, with seven being British-born, eight if you include Coldplay’s joint headline billing on Something Just Like This.

Rag’n’Bone Man’s hugely successful breakthrough single Human racks up a further 907,000 equivalent units this year (5), while follow up track Skin appears further down the list on just over half a million units. Elsewhere, Clean Bandit’s run of success continues well into 2017 – Symphony ft. Zara Larsson is currently the seventh biggest song of the year (820,000). The track became the group’s third Number 1 single back in May.

Grime is represented on the rundown with Stormzy’s Big For Your Boots at Number 32, followed by Did You See by rising star J Hus at 34.

Newcomer Dua Lipa also scores multiple entries with her Martin Garrix collaboration Scared To Be Lonely (22) and Be The One (31), while Canadian star The Weeknd features twice with his Daft Punk collaborations I Feel It Coming (36) and Starboy (38). 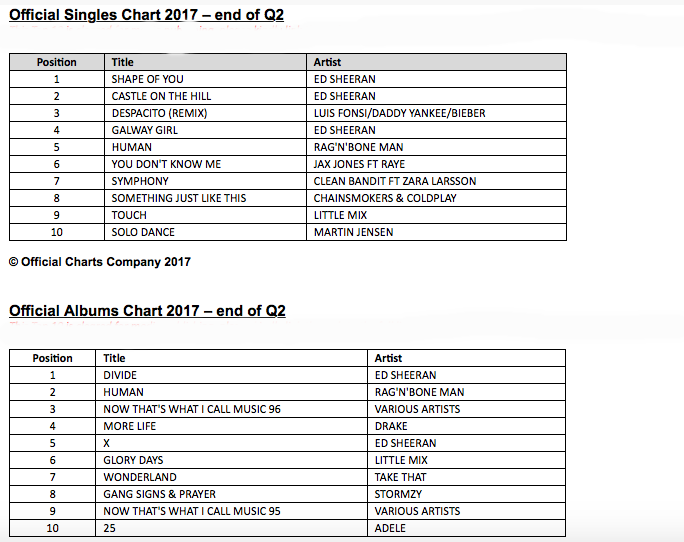