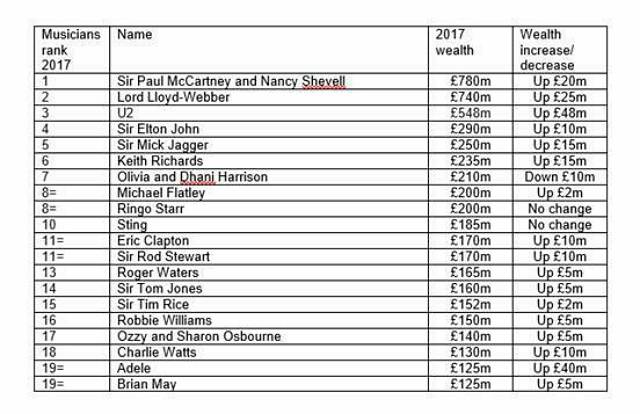 Adele, 29, who also appears in the main Rich List for the first time this year, having first appeared in The Sunday Times Young Rich List in 2011, is now worth a cool £125m. Having increased her fortune by almost 50% – £40m – in the past year alone, she is the joint 19th richest musician in the Music Rich List.

Adele, 29, followed her phenomenally successful 2015 album 25 with an ongoing 122 date world tour, taking around £138m at the box office. Her main company’s financial statements show profits of almost £20m in 2015 and hold assets of £13m. In February, Adele won five Grammy Awards, taking her to 15 in total. Brian May, the lead guitarist with Queen, shares 19th place on the Music Rich List with Adele, valued at £125m.

At 160 pages this year’s Sunday Times Rich List - the 29th annual edition to be produced - is the biggest ever. The definitive guide to wealth charts the fortunes of the 1,000 richest individuals and families in the British Isles.

Robert Watts, the Compiler of The Sunday Times Rich List 2017, said: “What a year for Adele. Such strong record sales and a busy touring schedule propel her into our main list for the first time. Still in her 20s, if Adele’s career lasts as long as many of the other entries in our list, she has the potential to be the highest-earning British musician of all time.

“The rises we have seen from the Rolling Stones and other older bands are very striking. Many of these groups continue to play lucrative gigs well-into their 70s - with their wealthier fans prepared to stump up more for their tickets than younger fans of new acts.

“It seems rock music - be it performing or watching - is no longer just for the young.”

Sir Paul McCartney and Nancy Shevell, who top the Music Rich List, are now worth £780m, this year’s £20m increase largely thanks to McCartney’s continued live performances and online sales.

Sir Paul McCartney, 74, is still recording music and touring, most recently playing three concerts in Japan last month. His biggest pay cheque in the last twelve months almost certainly came from October’s Desert Trip festival in California where he earned an estimated £8m. A deal was also signed in 2015 to allow the Beatles’ 13 albums to be sold on streaming services and as one of the group’s main songwriters, he earns well from such sales. His wife, Nancy Shevell, 56, is also worth £150m with income from her father’s New England Motor Freight trucking company.

McCartney and Shevell are closely followed by Lord Lloyd-Webber who boasts an impressive £740m fortune in 2017, having added an additional £25m to his wealth in the last twelve months.

Lord Lloyd-Webber, 69, is still heavily involved in musical theatre. He has 30 productions running around the world this year and is working with Sir Elton John on an animated film version of Joseph and the Amazing Technicolor Dreamcoat. Lloyd-Webber remains one of the leading composers in the world and is currently celebrating 50 years in the business. He divided his business assets into two companies in recent years: ‘Really Useful Investments’ for theatre; and ‘The Really Useful Group’ for his worldwide business empire and royalties. This move seems to have had a positive impact on his finances.

Forty-one years after U2 formed in Dublin, they continue to sell out concerts worldwide. The band’s ‘Joshua Tree’ tour begins this month and includes 33 concerts in nine countries, earning the band big money. Their royalty income has also been largely tax-free since they moved operations to the Netherlands in 2005. During their careers, they have sold more than 170 million records worldwide and won 22 Grammy awards, more than any other band on record. Their £548m fortune, up £48m on last year, places them third in the Music Rich List.

Musical knights Sir Elton John and Sir Mick Jagger make up the remainder of the top five. They are worth £290m and £250m respectively. Jagger and fellow Stones’ Keith Richards (£235m), Charlie Watts (£130m) and Ronnie Wood (£65m) have seen their combined fortunes rise by £50m in the past year, with 14 live shows in North and South America each netting £7.5m on average.

Olivia and Dhani Harrison, wife and son respectively of the late Beatle George Harrison, are the only fallers in the top 20 of the Music Rich List. Dhani, 38, announced last year that he and his wife, Icelandic former model Solveig Karadottir, were to divorce, with the terms reportedly being dictated by a prenuptial agreement. They rank seventh on this year’s Music Rich List, down £10m from last year, with £210m.

The 2017 Sunday Times Rich List – the definitive guide to wealth in the United Kingdom – is published on Sunday, May 7. The 160-page special edition of The Sunday Times Magazine is the biggest issue of the Rich List ever published since it first appeared in 1989. It charts the wealth of the 1,000 richest people in the UK. The list is based on identifiable wealth, including land, property, other assets such as art and racehorses, or significant shares in publicly quoted companies. It excludes bank accounts, to which the paper has no access. The redesigned magazine includes several interviews and features, focused on some of the leading players and personalities among the richest 1,000, as well as a full ranking by order of wealth. The Young Rich List details the 50 individuals with the biggest fortunes aged 30 or under.

The Sunday Times Rich List is compiled by Robert Watts.