The incarcerated former Death Row Records CEO was with Tupac the night he was killed in a drive-by shooting in Las Vegas, and he has now confirmed details of the 1996 incident alleged in Tupac Assassination: Battle for Compton are true.

Knight, who is behind bars awaiting a separate murder trial, was grazed by glass and shrapnel as he and the 2017 Rock & Roll Hall of Fame inductee were shot at while stopped at a traffic light.

He has always refused to identify the shooter or name the person he believed was responsible for his friend and protege's death, but now he has given the new film's co-directors Michael Douglas Carlin and Richard Bond a big thumbs up, insisting their documentary offers the truth behind Tupac's killing.

Bond tells WENN he has a signed affidavit from Knight's criminal attorney Thaddeus Culpepper insisting that the story laid out in Tupac Assassination: Battle for Compton is all true.

"When our book, Tupac: 187 The Red Knight, came out and we were working on the movie, we gave the salient points of the book to Thaddeus Culpepper, who read them to Suge Knight," Bond says. "Suge's initial response was, 'Who the hell are these guys?'"

Tupac: 187 The Red Knight chronicles an attempted coup at Shakur's record label, which led to the shooting in Las Vegas.

Bond insists Suge is ready to make a statement about Tupac's murder, because it serves him to link it to his current situation - and helps bolster his story that he has been a target of gangs out to get him for years.

"Culpepper told Carlin individually that not only did Knight confirm the events as portrayed in Compton, which portray Knight was the intended target and Shakur as collateral damage, as true, but also goes on to allege that these 1996 events may have been the first in a history of attempts on Knight's life, culminating in the recent attempted killing of Knight at the 1OAK Club in Los Angeles, where Knight was shot six times," a film spokesperson says.

"When Knight was not being shot at, he has been the target of allegations that he was responsible for the shooting of Shakur rival Christopher 'Biggie Smalls' Wallace in 1997. In fact, even now Knight is held pending trial, where he stands accused of running over a man with his truck in what he contends to be yet another attempt on his life."

"He admitted to Culpepper that the theories in the movie were true," the source adds. "Bond had met with Knight's private investigators, who were interested in how this information was collected, and Bond and Carlin stand by their insistence that Knight was a victim in Vegas, at One Oak and in the Compton incident Knight is currently pending trial for.

"The hope is Knight's confirmation of the story laid out in Compton (the film) may put a final stamp to close this mystery, after 20 years." 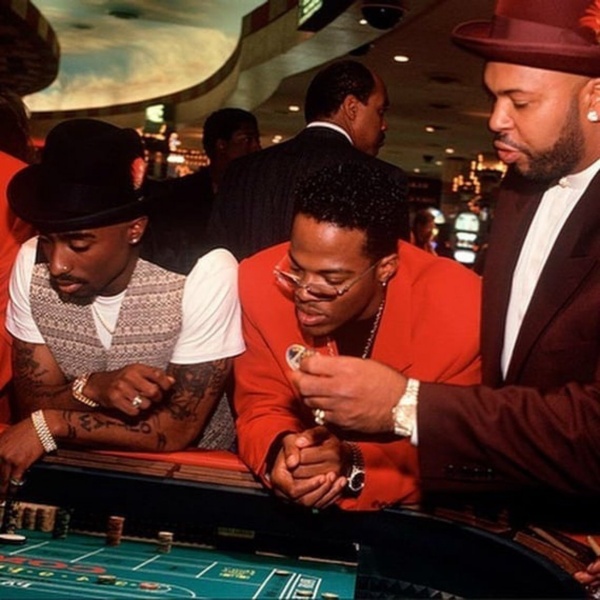 Tupac could often be seen playing at the most glamorous casinos*

This closure would certainly be a fitting end for an artist whose life will be celebrated on 7 April (17), as he is inducted into the 2017 Rock and Roll Hall of Fame.

Suge, who was hospitalised after the 1OAK shooting in 2014, is currently facing charges of murder, attempted murder, and hit-and-run following a dispute in Compton, California in January, 2015, when he struck and killed his friend Terry Carter and injured actor Cle Sloan as he tried to speed away from a fight. His trial is due to begin in June (17).